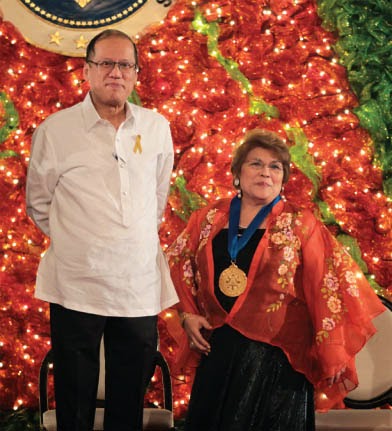 I am Anita Sasaki. In Japan, they all call me Nanay Anita.

Looking at everyone here inside the hall, I feel so humbled. Actually, just realizing who you all are around me makes me feel so inferior. I feel I do not belong here at all. You are professionals, highly educated people, businessmen, artists, philantropists. And I ask myself what am I doing here with all of you?

Why? Because I didn’t even finish my college education in the university. I did not celebrate garduation.
I didn’t even celebrate my debut party at 18 years of age. Why? Because I was married at the age of 14. I don’t even recall if I had a wedding party back then. I was married so young and I admit I didn’t have a happy marriage then. I felt life was all wasted for me.

Then, at the age of 47, my life turned around. I met a Japanese guy who accepted and loved me for who and what I am despite my age and with 10 grandchildren already!

Then I asked myself, “What will I do in Japan? Lola na ako.” But I didn’t know God has a mission for me.

All I know is what I did for the past several years is what a mother should do to all her children. What I gave was what is in my heart and head. And I wanted to inspire especially the young ones, our youth.

I wanted to serve the smallest of the community because they are the most fragile. I wanted to help the little ones. I saw the need to serve them because I saw that our youth today were not given the right upbringing. I have seen many broken families and it is the children who are affected the most.

This was part of the speech given by Anita Sasaki during the December 3, 2014 at the the pre awards dinner for the recipients held at the 33rd Floor, MDC 100 Building, E. Rodriquez. Jr. Avenue Corner Eastwood Drive, Libis, Quezon City. Ms. Anita Sasaki is the founder of CASTLE (Christian Association Serving Traditional Laymen’s Evangelization) and “Tahanan ni Nanay” which is a half-way house for Filipinos in distress as well as a learning center for Filipino-Japanese children.

My history with Nanay Anita started more than a decade ago. A small company wanted to hire me to make a Philippine newspaper for Filipinos in Japan. For a few weeks, I had been going to the company and doing feasibility studies. Because of the lack of financial resources and staff, I declined to move ahead with the plan. However, during those few weeks, I met this humble woman in the person of Nanay Anita.

Nanay Anita is your mother away from your real mother. She is your “Nanay” in Japan whether you like it or not. She will accept you for who you are and will treat you like one of her dozens of grandchildren plus the hundreds she has already adopted in Japan. She is a feisty but loving mother showering everyone with positive and inspirational stories and sermons.

The most wonderful thing about Nanay Anita is her shimmering glow of positive energies. Age and sickness cannot delay nor deter the surges of wisdom she has learned throughout the years. And she is always ready to impart her motherly wit, wisdom and watchfulness to whomever she comes across with. 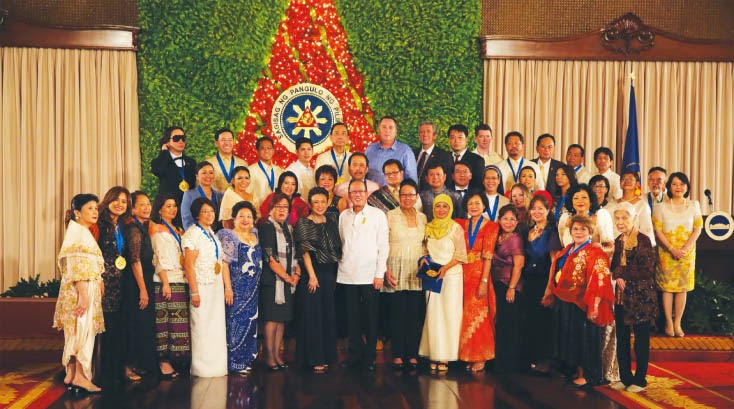 Then I started to do Jeepney Press, a non-commercial publication that would stay away from selling and concentrate on helping upgrade the standard of Filipinos living in Japan through stories of hope, survival and success of Filipinos navigating the terrains of this foreign land we have adopted and called home. I am happy that Nanay Anita is one of our regular staff with her very own column, Kwento Ni Nanay.

And as one of the many adopted children of Nanay Anita, I was filled with joy to receive the news of her being selected as one of the 2014 Presidential Awardees for Filipino Individuals and Organizations Overseas. Only 33 from the nominations around the globe were chosen and Nanay Anita was chosen as the recipient of the Banaag Award conferred to distinguished Filipino individuals or groups in recognition of their outstanding contributions for providing assistance to the country or advance the cause of Filipino communities overseas.

Nanay Anita recalls the first time she was notified about her award.

“It was November 5 when I got a message stating that I should call a certain number. The number started with a 6392. So I said the call came from the Philippines. I didn’t have an international calling card as I always use viber nowadays. I had to look around the house for a card quickly. Luckily, I found a card that gives a free 3-minute call. I called immediately and the voice on the other side congratulated me and said I was selected as one of the recipients for the Presidential Awards this 2014. I was speechless and everything around me felt silent. I asked them if the Philippine Embassy in Tokyo already knew the news. They said I was the first to know.”

At first, Nanay Anita was wondering it could have been a prank caller so she immediately called the embassy until Ambassador Manuel Lopez advised her to leave for Manila soon. That was the time she realized the news was valid and veritable after all. She was actually planning to go home a few days before Christmas but it had to be sooner than expected.

Nanay Anita looks back at the time she landed at the airport in the Philippines.

It still felt like Nanay Anita was living in a dream world as everything that was happening to her hasn’t sunk to her level of reality yet. It was the 3rd of December, a pre-awards dinner was given to the awardees. She was warmly welcomed by everyone. Then, they called her name. She went to the podium and introduced herself...

I am Anita Sasaki. In Japan, they all call me Nanay Anita...

Nanay Anita still considers herself very young at heart and age will definitely not deter her from helping others and achieving her mission. We look forward to seeing her more as she moves on with life for others.