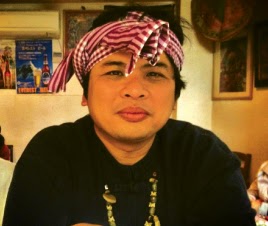 
Michael Raymon Pangilinan, 44, from Angeles City is not just an ordinary OFW in Japan. He is a visiting researcher the Research Institute for Languages and Cultures of Asia and Africa (ILCAA) at the Tokyo University of Foreign Studies (TUFS) working on the documentation of Kapampangan language, history and folklore. He went to Japan early last 2013.
A graduate of AB Philosophy at San Carlos University in Cebu City with units in masters in Archeology at the University of the Philippines, Pangilinan’s passion in  Kapampangan culture is undeniably his passes to be one of the researchers in one of the most prestigious university in Asia. 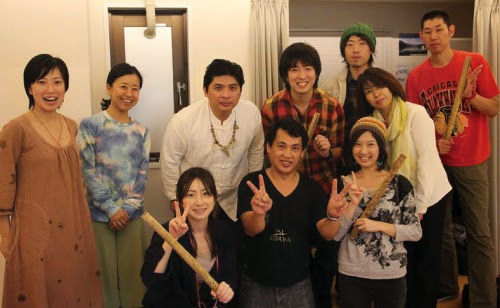 “I was invited to share my knowledge on Kapam-pangan language, History and Folklore since the number of scholars working on this is very limited, if indeed there are,” he explains. Despite a lack of a post graduate degree, the following have been considered to grant him the post of a visiting researcher: his experience as a researcher in the field for many years, presentation of various scholarly papers in international conferences for the past decade, a. the publication of  his book on the indi-genous Kapampangan script, Kulitan, not withstanding his more than 20 years of promoting Kapampangan language and culture within the Kapampangan community at home and abroad. Indeed, Pangilinan’s achievement garnered him an award as Most Outstanding Kapampa-ngan Award in the field of Culture in 2010. He is also a respected scholar in the field of international linguistics and the academic community.

“Aside from  the usual research and lecture presentation on Kapampangan language and culture to colleagues, I make sure I always introduce myself as a Kapampangan and explain what a Kapampangan is, should they ask for more clarification,” Pangilinan clarifies.

Pangilinan  compares his upbringing in the foothills of Bunduk Alaya (Mt. Arayat) in the town of Magalang, Pampanga by his grandfather to the Japanese culture.

“From him I learned how to communicate non-verbally, be respectful and courteous to both man and nature, to know my place before I act or speak, to respect my elders and seniors and to always be sensitive to the situation and other people. The Japanese are a master of non-verbal communication and of being sensitive to the feelings of others. As a result of growing up under my grandfather's care, I can cope very easily with Japanese culture,“ he shares.

According to Pangilinan, Japanese culture may be quite confusing and even frustrating to the current Filipino generation who grew up in this wannabe-American Manila-based mainstream Wowowee-Eat Bulaga culture. He  often see this conflict with the new batch of Filipinos who often come to Japan without learning the language and culture first, thinking that since they are "visitors" they are entitled to special treatments and that the Japanese people would have to adjust to them. Sadly, it does not work that way in Japan. The first thing most Filipinos realized when they first come to Japan is that English is not such a universal language after all.

He explains that in Japan, one can’t be late or talk loudly. One must always consider the people around.

“You make sure that whatever you do does not inconvenience other people. You always have to be polite and courteous and grateful. You are not supposed to publicly express anger or disappointment, or whine or complain,“ he adds. In Japan, a person who complains all the time or has no control of his or her emotion is viewed as someone who is weak and unreliable.

Promoting Indigenous Scripts of Southeast Asia
Aside from being a researcher, Pangilinan is embarking into a worldwide project in Japan about the promotion of indigenous scripts of the Southeast Asia.   The International Workshop on Endangered Scripts of Island Southeast Asia seeks to call the attention of the international academic community to study the existing scripts of Sulawesi, Sumatra and the Philippines. It was held last February 27, 28 and March 1, 2014 at the Research Institute for Languages and Cultures of Asia and Africa, Tokyo University of Foreign Studies.
According to Pangilinan, most scholars are focused on the old Tagalog script which is Babayin while the other indigenous languages are almost forgotten. The participants in the said workshops are mostly non-scholars but activists and artists. Among them are  Anya Postma and Emily Catapang of the Mangyan Center in Mindoro, the renowned film director Kanakan Balintagos (Auraeus Solito) of the Palawan ethnic group and the young artist Bruno Tiotuico of the Aguman Sulat Kapampangan.
Pangilinan believes that including the non-academics will further represent the endangered scripts of the Philippines, because these people are working directly on their own cultural heritage. He also further mentioned that the study of endangered indigenous scripts seem to be a private sector advocacy and on an individual basis. Fortunately, some of these scripts are helped preserved by notable scholars like anthropologist Antoon Postma of the Mangyan Center and the Aguman Sulat Kapam-pangan, an organization that promotes Kapampangan script and culture.
Pangilinan further claims that Mangyan and Kapampangan are luckier than the Tagbanuas of Palawan because the latter do not have scholars studying their script. The last scholar on Tagbanua is Hal Conklin of the United States who is already 82 years old.  He further laments that foreigners are more interested in the indi-genous scripts rather than the local academics who are more interested only in the revival of the Tagalog Baybayin.
Due to the diversity of the Philippine cultures and scripts, Pangilinan hopes that the workshop will create awareness regarding the current status of Philippine scripts among international scholars in general and scholars in back home.

Being an OFW and a Filipino

“A Filipino who is well grounded in his indi-genous ethnic identity ~ his ethnic language, history and culture, is very much appreciated in Japan. Keepers of indi-genous ethnic traditions are highly appreciated.” he explains. Pangilinan believes that there is already a change in the wind ever since Japan has become stricter with human trafficking and the sending of female entertainers who end up working as bar girls. The growing number of students, intellectuals, culture bearers and professionals from the Philippines who are entering Japan now who have a very good understanding of Japanese language and culture. Many of those OFWs and scholars have good working ethics and are sensitive to Japanese sensibilities.

“I believe many of us are helping to change the stereotypical image of the overseas Filipino as a "Yankee" (trouble-maker) or "Japayuki", he says. To fellow OFWs, he has this to say, “Be proud of who you are and your identity. Don't be a floating algae. Go back to your roots and recall the teachings of your parents and grandpa-rents. In a foreign country, the major source of strength and stabi-lity is how firmly you are rooted to your true indigenous self.”

With the recent shift in the educational setting of the Philippines by using the local language as the medium of instruction from grade 1-3, the innovation of the Kapampa-ngans and other ethnic groups in the Philippines is a welcome change in the pursuit of cultural development which will be beneficial for the present and the next generations. Promoting indigenous culture to other countries only shows that the Filipinos are one diverse nation and not a monolith group of people with only one culture and language.